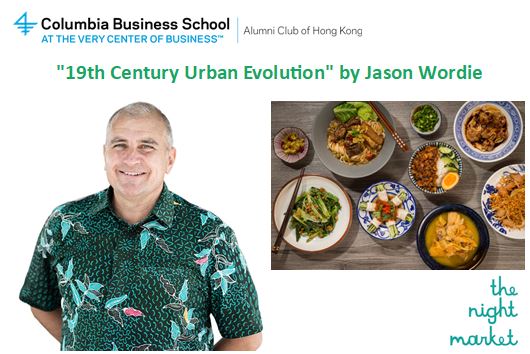 “19th Century Urban Evolution” - Jason Wordie explains - through reference to the past - how Hong Kong has evolved into the form a modern-day resident would begin to recognise.

Contemporary Hong Kong often seems a random jumble, with little apparent planning. This general perception obscures as much as it reveals. To understand better how and why the modern city “is how it is” we need to step back into the mid nineteenth century to see how the urban fabric was laid and subsequently evolved.

While geographically close, Central, Wanchai, Causeway Bay and the Mid-Levels all evolved in distinctly different manners, due to the presence (or absence) of industrial enterprises, military installations, community religious or cultural frameworks or infrastructure facilities.

These various component parts of Hong Kong’s early urban evolution will be explored in this extensively-illustrated lecture. Along the way, the various fragments about Hong Kong that even relatively short-term residents all “know” will be concisely fitted together into a coherent, meaningful, composite picture. Which helps to explain - through reference to the past - how Hong Kong has evolved into the form a modern-day resident would begin to recognise.

About the Speaker: Jason Wordie

Jason Wordie is an established local historian and writer in Hong Kong. He has made his home in the New Territories for over thirty years.

For over twenty years, Jason has had a series of regular columns in the South China Morning Post. His current column, Then and Now, appears every week in the Sunday Morning Post’s Post Magazine.

See how easy it is to create a registration form.